The variants in your sample (ANALYSES mode only) are listed in the side bar to the left: 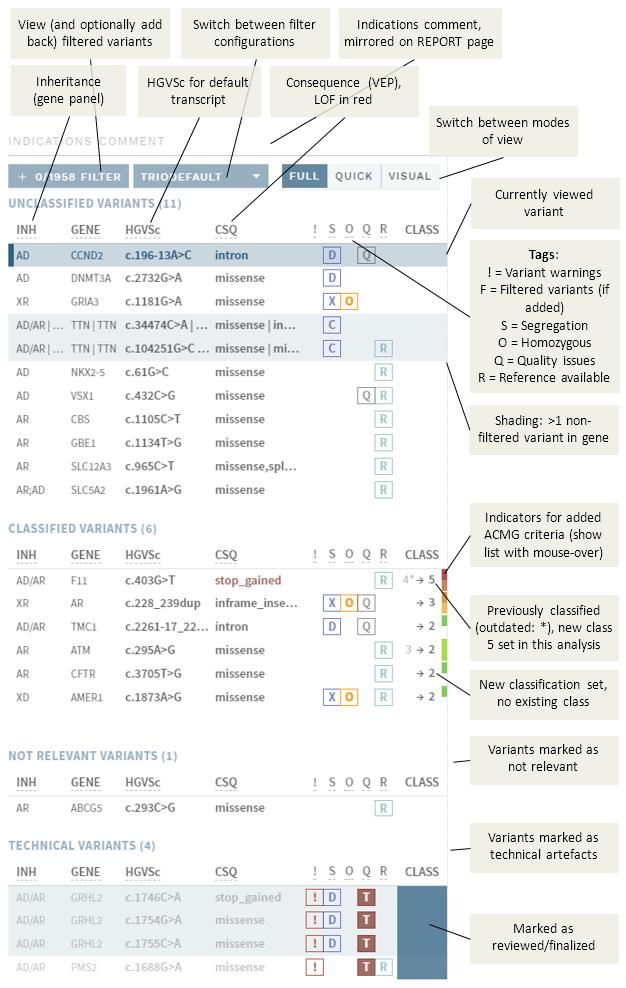 The side bar layout described here is for the default, full classification mode. The layout is almost the same in other CLASSIFICATION view modes (QUICK and VISUAL) and on the REPORT page, except for some columns/buttons. For details, go the referenced pages.

The side bar has an INDICATIONS COMMENT field at the top, corresponding to the same field on the REPORT page (changes in either place is mirrored in both).

Directly beneath that are several buttons:

Variants are listed in one of four side bar sections depending on the state of the variant interpretation:

The default sorting in each section is (Class) - Inheritance – Gene – HGVSc. You can change the sorting by clicking on any of the list headers (also in Quick classification):

If applicable, variants in the variant list are tagged with:

Presence of the M tag (parental mosaicism) often indicate quality issues rather than a parent actually being mosaic. E.g. MD indicates some uncertainty of the de novo status (D), as one or both parents have some evidence for the alternative allele (but not enough reads to be called heterozygous).

Hold the mouse cursor over a tag to see the full label.

Existing or newly set classes are given in the right-most column:

Outdated variants marked with * in CLASSIFIED VARIANTS should be re-interpreted before you finish the analysis.

You can toggle a blue colouring of the background of the class by clicking on it in the side bar:

This is done automatically when you finalize a variant. Manual marking can be used to indicates which variants have been reviewed, i.e. to keep track of the work done in a review round.